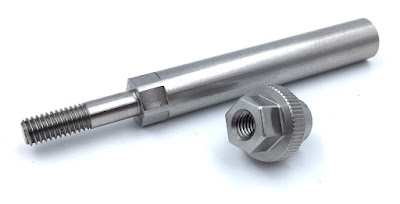 We had 100 pcs of this mating custom 316L machined hardware produced domestically with a lead time of approximately 4 weeks.  These 100 pcs were to be used in testing prior to larger volume production.  The rod pieces measures 90MM in overall length and the knurled nut measures 17MM in overall height.  Getting the nut fully tapped turned out to be the trickier part of the process - the taps kept breaking before the full depth was reached.  After a few adjustments and a change-up on the thread tap style used that last issue was finally resolved.  Material certs were provided with the parts per customer's original request.

Large quantities of these custom made 316L machined fasteners would be best supplied on a 12 month blanket purchase order basis.  The Blanket Order concept allows the customer to access the large quantity cost savings without paying upfront for the entire large quantity order. Instead we take on the burden of carrying the bulk inventory and only release the parts as needed, or often on a pre-scheduled basis provided by the customer.