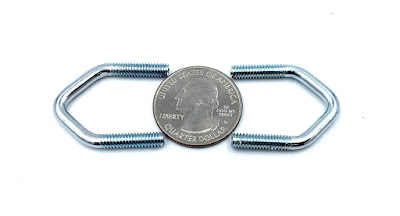 These are 8-32 custom V bolts we had domestically produced for our customer.  Initially 12 pieces were run for prototype testing purposes prior to full production order.  The inside length to the bottom of the V is 1" and .625" between the legs.  0.6" of 8-32 thread is incorporated on both legs.  One thing to note with this type of bent part is that the threaded areas are clamped during the bending process - at minimum this results in a small visual dent in the threads and at worst, if over clamped the thread can be damaged to the point of creating issues running the mating parts.  We carefully inspect the parts to make sure this latter issue is avoided.  Unfortunately, there is no way to completely avoid grabbing on to the threaded areas for mass production that we have seem, without of-course limiting the amount of thread on each leg.