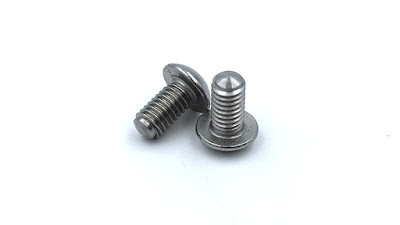 These custom modified button socket screws were made using standard off the shelf M3 X 0.5MM button socket cap screws.  The COTS version was modified to an overall length of 7.24MM, inclusive of the head height. The dog point prior to the radius start was set at a length of .015" and diameter of .090".  At the end of that dog point section the radius was machined at R 0.075.  Lead time for a similar modified part is typically 3-4 weeks from the attainment of the COTS version.

Large quantities of these custom modified socket cap screws would be best supplied on a 12 month blanket purchase order basis.  The Blanket Order concept allows the customer to access the large quantity cost savings without paying upfront for the entire large quantity order. Instead we take on the burden of carrying the bulk inventory and only release the parts as needed, or often on a pre-scheduled basis provided by the customer.